Welcome to The Banshee Labyrinth, Scotland’s Most Haunted Pub

We are open from 7pm Sunday thru Thursday and from 5pm Friday and Saturday right thru to 3am every night!

Our venue proves why Edinburgh really is a Jekyll & Hyde city! Half of the club was once part of the infamous “underground Vaults” -once the haunt of criminals, thieves and the very unsavoury. It was in these former slums that many poor and innocent met a very grisly end! Ironically right next door, the front of the club; was once home to one of the richest men in Edinburgh, Lord Nicol Edwards. Edwards was Lord Provost of Edinburgh during the reign of King James VI/I of Scotland & England, and was reputedly a vile man – not only did he abuse his own wife horribly, but he is said to have had a basement dungeon beneath his house in which he at times personally tortured suspected witches before trial.

Now, along with many other spirits, ‘The Banshee’ haunts this Labyrinth. When refurbishing the venue a group of workmen believed they all heard a terrifying scream. A few hours later, one of the workmen received a phone call informing him that a family member had passed away.

Wherever you choose to sit back, relax and enjoy your drink, remember to be very careful. Many have placed their drink down simply to watch it slide straight off the table and smash against a wall as if thrown by an unseen force!

So what can you expect from a visit here?

Expect a family run business that is as much a tourist hotspot as an alternative entertainment venue.

Expect FREE ENTRY every evening and something different every night.

Expect 7 rooms in total including 3 bars, a Pool table room, a Gig room and a 50 seater Cinema.

Expect a large selection of Drinks from Rums to Whiskies, Cappuccinos to Soft Drinks, Shots and Cocktails and even our speciality Cask ale ‘Howel At The Moon’.

Above all,  Dare you enter The Labyrinth, Expect to remember your visit, as The Banshee will remember you!

We are based in the centre of Edinburghs Old town just a few steps from the Royal Mile; Why not check out our little sister pub in Edinburghs New Town, The Black Rose Tavern – the coolest rock bar in town! With Live Music, Djs, Open Mic and and the infamous Rock Karaoke, the Black Rose is an all round Rock Entertainment venue with something different happening every night of the week and some of the best food in town. 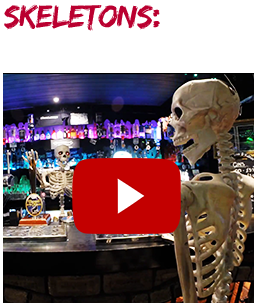 We are now taking bookings for your function. You will be surprised at our prices! Buffets also available.

If you’ve got questions about our sound equipment or want a gig slot drop us an email to Gig Enquiries with your request.